Robert Butler, the first Director of the National Institute on Aging, coined the term ‘ageism’ in 1969 to expand on recognized forms of discrimination and prejudice like racism and sexism to include the older population, although it can apply to all ages as well. Connected to a generation-gap mentality, as he described it, “Age-ism reflects a deep-seated uneasiness on the part of the young and middle-aged – a personal revulsion to and distaste for growing old, disease, disability; and fear of powerlessness, ‘uselessness,’ and death.” It was quickly adopted by the media and found its way into the Oxford English Dictionary. Ageism is a popular term which is a specific pathological fear (or phobia) of aging. In his original formulation of ageism Dr. Butler noted that, with respect to age, prejudice could move in other directions. For example, prejudice of the old toward the young. On the one hand, age as a social construct conveys power and authority, and on the other hand, it often means powerlessness and loss of authority.

Most older persons report that they have experienced ageism. Ageism remains embedded within the nation’s institutions with discrimination in the workplace, health care, language, and in the media. Examples include the failure to hire or promote older persons, I have several friends that have mentioned that a younger person was chosen over them for a job, even though my friend had better qualifications. It’s never too late to start a new job. It’s estimated that, on average, a typical American worker now has more than ten jobs over the course of their lifetime. But unfortunately, whether you’re inspired to enter a new field or want a new job after retirement, one of the biggest obstacles to re-entering the workforce can be ageism. This type of discrimination involves treating an applicant less favorably because of their age. The Age Discrimination in Employment Act (ADEA) forbids age discrimination against people aged 40 or older. Yet, in reality, applicant age often affects employment opportunities because many recruiters and hiring managers still struggle with unconscious biases related to older workers.

Other forms of ageism include the absence of appropriate care of older persons in long-term care institutions, abusive language such as “crock,” “old biddy,” and “crone,” and imagery revealed in ugly, distorted, angry, and negative cartoons and drawings. In addition, ageism is apparent in direct personal responses toward older persons—insensitivity and impatience are not uncommon. Especially painful is the extent of various forms of abuse—physical, emotional, financial, even sexual. Elders are particularly targeted by scammers because of their willingness to answer the phone, respond to attention and kindness, and generally believe people.

Older people face significant stereotypes about their competency or intentions when entering the workforce. An AARP study found 90% of people pre-maturely pressured into retirement never make as much money again if they re-enter the workforce. The same study found that 3 out of 5 older workers have experienced or seen age discrimination in the workplace. In addition, almost 25% of team members age 45 and older have heard negative comments about their age from coworkers or supervisors and the large majority of these older workers anticipate age discrimination being a hurdle in finding a new job.

Effects of ageism go beyond money. Clients of any age may have a conscious or unconscious level of ageism percolating in their minds – the classic “over-30”/ “under-30” problem. Jack Weinberg of the 1960s Baby Boomer Free Speech Movement coined “Don’t trust anyone over 30”, which evolved into “Don’t trust anyone under 30” in 1984 when the Boomers turned 40+. Clearly age has been critical in our thinking and behaving for decades. Studies have shown that patronizing language or even speaking loudly at older adults can adversely affect them psychologically or even make them less confident in their abilities. So how do you confront ageism, including in the workplace, especially when it occurs implicitly rather than out in the open?

It’s been a long-standing challenge to reduce or eliminate the ageism and other “-isms” that may be somewhere in the back of everyone’s mind. The challenge for us and all practitioners is to be aware of the prejudice and be ready to respond in multiple ways with support and professionalism to best respond to our own behavior and others to overcome the “isms” and even expand opportunities of an aging society and an aging world.

Like all stereotypes, the stereotype of a typical older person exaggerates the importance of a few characteristics and the society assumes these characteristics to be true for all older people. Prejudice influences language and vice versa. Younger adults often employ patronizing speech when interacting with older adults by exaggerating pitch, speaking at a slow rate, in a demeaning emotional tone, or using a lower quality of speech. Research has found that the patronizing language and changes in speech pattern on the part of younger adults toward older persons occurred when the speakers received physical cues that the people to whom they were speaking were old, despite signs that the older persons were mentally and or physically capable. The older person on the receiving end of this demeaning communication often ends up with a reduced sense of self, lower self-esteem, and perceptions of low self-competence, which enforces existing stereotypes.

Prejudice against older persons can be seen as arising from complex attitudes and fear of mortality. Ironically, most people consider living a long life to be an achievement and they strive to live as long as they can. So, at the same time as long life in and of itself is considered a victory, as a group older women and men are considered physiological failures. This blanket assessment of the physical condition of all older people does more than perpetuate age discrimination. This ageism has been shown that it can also alter blood chemistry and negatively affect health. Additional studies have similarly found that the projection of negative ageing stereotypes on an older person can decrease memory performance. The psychological and philosophical source of ageism perpetuate the distortions of the stereotype. When society accepts that individuals in a particular age group possess specific characteristics, it is assumed that everyone in that group possesses those characteristics. Therefore, all of us have to combat ageism and promote “adding life to years”. 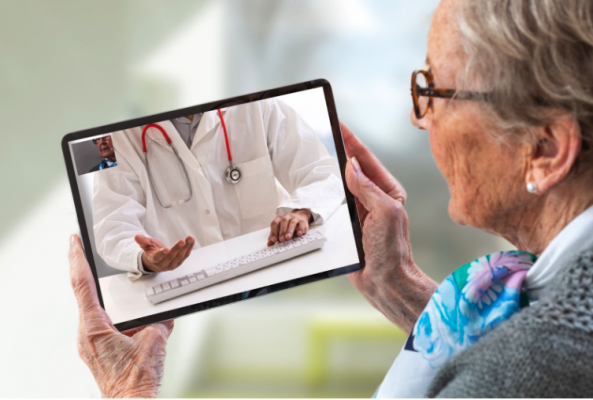 Telehealth: A Positive Program from COVID